Lockheed Martin (LMT – Get Report) is getting attention this afternoon following the firm’s second-quarter earnings release. Lockheed earned $5 per share for the quarter, just edging out the $4.78 that Wall Street analysts were expecting, on average. Shares have spent most of Tuesday’s trading session ever-so-slightly lower on the heels of the relatively unsurprising results.

But lest you think that Lockheed’s Q2 earnings are a complete snooze-fest, there’s good reason to pay attention to the price action in this defense sector giant.

Lockheed looks like a solid buying opportunity in the wake of its earnings results. To figure out how to trade it from here, we’re turning to the chart for a technical look. 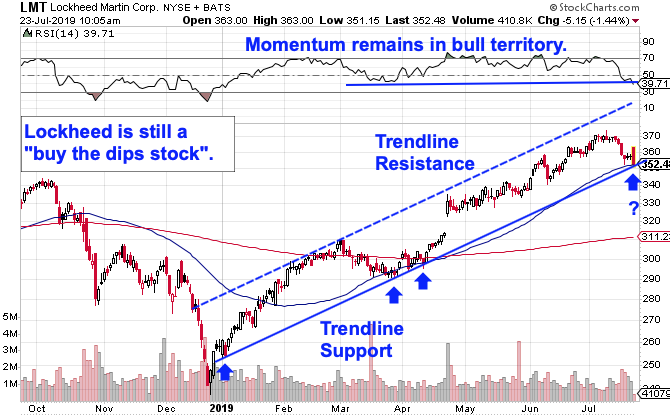 At a glance, you don’t need to be an expert technical trader to figure out what’s happening in shares of Lockheed Martin. Instead, the price action in this big defense name is about as straightforward as it gets.

Since the calendar flipped to 2019, Lockheed Martin has been bouncing its way higher in a well-defined trading channel, catching a bid on every test of trendline support on the way up. Now, as shares cool off in July, market participants are staring down a buying opportunity as Lockheed tests trendline support for the fourth time this year.

Put simply, the next bounce off of support is the signal that it’s time to pull the trigger on this trade before the next leg higher.

That bullish trajectory is confirmed by momentum, measured by 14-day RSI up at the top of Lockheed’s chart. As Lockheed Martin’s shares have corrected this month, momentum has retraced back to around the same level it hit during the last big buying opportunity this past spring. That’s confirmation that buyers remain in control despite what might appear to be recent weakness.

Risk management is important to consider here, if you’re thinking about going long LMT this summer. The 50-day moving average has been acting like a solid proxy for trendline support since all the way back in late March – that makes it a logical place to park a protective stop below. If Lockheed materially violates its 50-day, then the uptrend is over and you don’t want to own it anymore.

Meanwhile, with earnings risk in the rear-view mirror, shares of Lockheed look primed for higher ground in the near term.

Retirement Savers Are Turning to Dividend Stocks for Income. Here’s How to Use Them in Your Portfoli...
This decade in Elon
Stock Markets Failed To Rally On China Trade Deal, Here’s Why